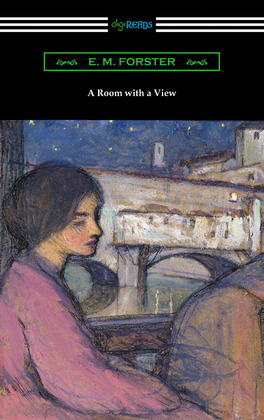 A Room with a View

First published in 1908, E. M. Forster’s “A Room with a View” is the story of a young English middle-class girl named Lucy Honeychurch. As the novel opens we find Lucy touring Italy with her overbearing older cousin and chaperone, Charlotte Bartlett. The two are upset over the views from their rooms. Having been promised views that overlook the river Arno, the two instead receive views of the courtyard. Their complaints are overheard by Mr. Emerson, who offers to swap rooms with them, citing the fact that he and his son George both have rooms that overlook the Arno. After a brief romantic encounter between George Emerson and Lucy while they are in Florence, the two travel on to Rome where Lucy is wooed by her friend from England Cecil Vyse. When Lucy learns from the vicar that a local cottage has been rented she discovers that the Emersons have arrived in Rome. Again the prospect of romance with George entices Lucy but she is torn between the more acceptable prospect of a union with Cecil. “A Room with a View” is the classic human struggle of choosing a partner who is the most socially acceptable versus the desire for true love. This edition includes a biographical afterword.