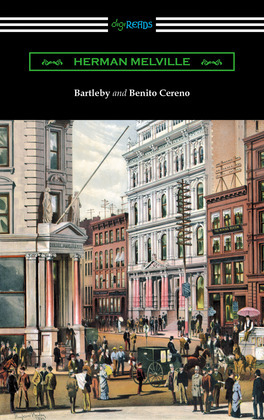 In this collection readers will find two of Herman Melville’s most renowned shorter works, “Bartleby: The Scrivener”, and “Benito Cereno”. The first story, “Bartleby”, was first serialized in two issues of “Putnam’s Magazine” in November and December of 1853. It concerns the office of a Wall Street lawyer who due to an increase in business hires a third scrivener named Bartleby to copy legal documents by hand. At first Bartleby proves to be a very productive worker but one day begins acting rather strangely. When asked to proofread a document he replies “I would prefer not to”, an answer he begins repeating perpetually in regards to all the tasks put to him. What follows for Bartleby is a tragic decline into apathy. The second story, “Benito Cereno”, first appeared in “Putnam’s Monthly” over three installments in 1855. It is the story on Don Benito Cereno, the captain of a Spanish Slavery ship, and the revolt that happens aboard his ship. Together “Bartleby” and “Benito Cereno” are widely regarded as two of Melville’s finest compositions. This edition includes a biographical afterword.