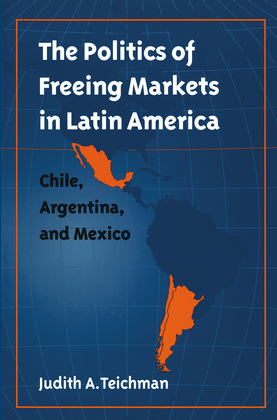 The Politics of Freeing Markets in Latin America

In the 1980s and 1990s, nations throughout Latin America experienced the dual transformations of market liberalizing reforms and democratization. Since then, perhaps no issue has been more controversial among those who study the region than the exact nature of the relationship between these two processes. Bringing a much-needed comparative perspective to the discussion, Judith Teichman examines the politics of market reform in Chile, Argentina, and Mexico, analyzing its implications for democratic practices in each case.

Teichman considers both internal and external influences on the process of Latin American market reform, anchoring her investigation in the historical, political, and cultural contexts unique to each country, while also highlighting the important role played by such international actors as the World Bank and the International Monetary Fund (IMF). Informed by interviews with more than one hundred senior officials involved in the reform process, her analysis reveals that while the initial stage of market reform is associated with authoritarian political practices, later phases witness a rise in the importance of electoral democracy. She concludes, however, that the legacy of authoritarian decision making represents a significant obstacle to substantive democratization.