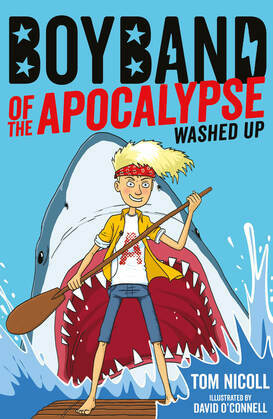 Boyband of the Apocalypse: Washed Up

Just when Sam thinks life has returned to normal he’s bundled into a black van by agents of the Apocalypse Intelligence Agency who send him off the remote jungle island of Fin del Mundo to appear on a survival reality TV game show. One of Sam’s rival ‘celebrity’ contestants is none other than the evil music mogul Nigel Cruul, who the AIA suspect is planning to bring back the Horsewomen of the Apocalypse. Luckily his best friend Milo and kick-ass sister Lexi are starring in the show too. But they’ll have to survive everything from crocodile infested swamps to public vote offs, if they’re to save the world once more.