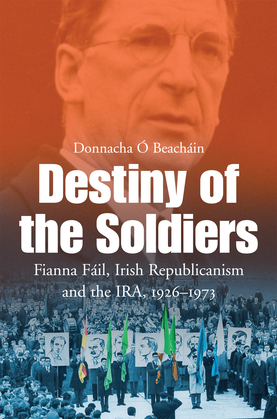 Destiny of the Soldiers – Fianna Fáil, Irish Republicanism and the IRA, 1926–1973

Incisive, engaging and thought-provoking, Destiny of the Soldiers charts Fianna Fáil’s political and ideological evolution from its revolutionary origins through extended periods in office.

Fianna Fáil is Ireland’s largest political party and one of the most successful parties in any democracy in the world. Until recent years, it has been almost constantly in government since 1932..

This fascinating volume argues that Fianna Fáil’s goals, foremost among them the reunification of the national territory as a republic, became the means to bind its members together, to gain votes, and to legitimise its role in Irish society. But the official ideological goals concealed what became merely a basic desire to rule. The balance sheet, consequently, became one of votes won or lost rather than goals achieved or postponed.

Destiny of the Soldiers assesses Fianna Fáil’s changing attitudes towards its parent party, Sinn Féin, and the IRA, and how these changes affected Fianna Fáil’s policies towards Northern Ireland. Never forgetting its republican roots, Fianna Fáil has at times been both troubled and conflicted by them. This was especially the case in the late 1960s and early 1970s when the Northern Ireland Troubles posed a challenge for all rhetorical republicans. At that time, Fianna Fáil found itself the governing party of a state whose legitimacy it had originally rejected: the consequent tensions nearly tore it apart.

Destiny of the Soldiers is the first survey of the party’s history which focuses on these unresolved tensions.

Destiny of the Soldiers: Table of Contents