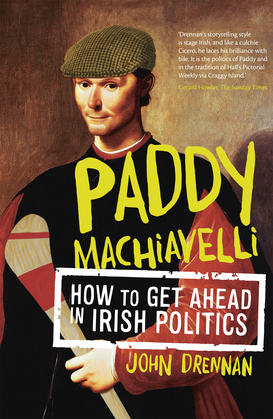 Paddy Machiavelli – How to Get Ahead in Irish Politics

The good, the bad and the cynical – how to get ahead in Irish politics

It might appear strange that a 16th-century Italian political philosopher should provide us with a roadmap to political power in Ireland, but as John Drennan’s tongue-in-cheek account Paddy Machiavelli makes clear, the gap between the parish pump and the Renaissance palazzo is a narrow one indeed. In fact, observe the Irish body politic for long enough and the lines between the Florentine’s faceless hero and our own Dáil aristocrats begin to blur ever so slightly.

A veteran of countless Leinster House power plays, Drennan takes inspiration from Machiavelli’s The Prince, dispensing invaluable advice for the aspiring politician, such as how to cultivate the cloak of being an ‘ordinary decent skin’, how to choose your scapegoats carefully, and how to be a straight-talker whilst embracing vagueness.

This hilarious account of the compromises that the Irish politician has to make in order to seize power is not just a ‘celebration’ of the politics of cynical amorality; it’s a timely reminder of the role we play in choosing our leaders.

In this wildly entertaining book, celebrated Sunday Independent columnist John Drennan is at his best. The definitive guide to success in Irish politics, Paddy Machiavelli will have you laughing and crying all the way to the ballot box.

‘Drennan’s storytelling style is stage Irish, and like a culchie Cicero, he laces his brilliance with bile. It is the politics of Paddy and in the tradition of Hall’s Pictorial Weekly via Craggy Island.’
Gerard Howlin, The Sunday Times

‘There is a fierce intelligence and fierce independence at work here. No one escapes his gimlet eye, and he brings to the whole bizarre ecosystem of the Dáil a unique perspective, that of the insider who remains resolutely outside.’
Brendan O'Connor, The Sunday Independent

‘Drennan is one of the best pundits in Ireland. He has an understanding of politics that is both instinctive and intellectual.’
Pat Leahy, The Sunday Business Post

‘[Drennan] reads the political game like the sort of bookie who always leaves Cheltenham with a full satchel.’
Ivan Yates, Newstalk