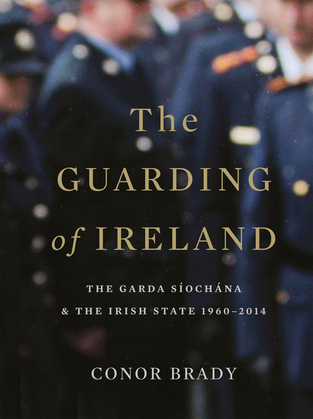 A very timely analysis of the Garda Síochána, the Irish police force, as it navigates one of the most difficult years since its foundation.

It is a story marked by success and failure, by attempted reform and resistance to change, by outstanding individual performance and deplorable lapses in discipline. More than an account of policing and politics, this is the story of the Republic's troubled coming of age.

In this excellent history of the Garda Síochána, the Irish police force, Conor Brady, the most authoritative historian of Irish policing, explores its successes, its failures and the biggest challenges it has faced from 1960 to 2014, and looks at the recent spate of crises around the Garda Síochána Ombudsman Commission (GSOC), leading to the resignation of Justice Minister Alan Shatter and Garda Commissioner Martin Callinan, that have rocked the force to its very core.

Beginning with one of the Garda&iacute’s greatest tests – maintaining the security of the Irish State during the Northern crisis and the Troubles – Brady goes on to chronicle the emergence of guns in Irish criminal life and the rapid expansion of the domestic drug trade and related gangland warfare, focussing on the interactions of the Gardaí and major Irish crime kingpins including Martin ‘the General’ Cahill, Gerard ‘the Monk’ Hutch and John Gilligan, alleged killer of Veronica Guerin.

Acknowledged as one of the successes of the independent Irish State, the Garda Síochána has not been without its flaws and its failings, and the author does not shy away from exploring these.

The Guarding of Ireland comprehensively covers the recent crisis surrounding the alleged bugging of the Garda Síochána Ombudsman Commission (GSOC), privacy concerns in relation to the recording of Garda phone calls, and the penalty points/whistle-blower controversy that led to the resignation of Garda Commissioner Martin Callinan and Justice Minister Alan Shatter.

Other fascinating subjects explored are how the supposed operational independence of the organisation has led to clashes with those in political authority, from Charlie Haughey to Desmond O’Malley, the difficulties surrounding structural reform and the author's thesis that there is a distinct correlation between the political health of the State and the way its police discharge their functions.

‘The Guarding of Ireland focuses on Irish policing from 1969, which saw both the publication of the Conroy report and the commencement of the Troubles, up to the current and ongoing scandals that this year have led to the resignation of both a commissioner and a minister for justice …
[The Guarding of Ireland] is &hellip as much an analysis of the politics of policing as it is of the policing itself. The Troubles, the modernisation of the force, and the rise in crime, drugs and organised crime are all documented in a style that is detailed but still engaging.
Vicky Conway, The Irish Times Weekend Review

‘[The Guarding of Ireland] traces the history of An Garda Síochána from 1960 to the present day. It is a fascinating narrative that should be compulsory reading for anybody associated with the current attempts to reform the force, and how it is governed …
For every vignette of personal heroism, like that of Garda [Michael] Reynolds, for every case of dedicated public service from individual members, there are also examples of a culture that leaves much to be desired.
What emerges from these pages is that the culture within the force is attributable, to a great extent, to attitudes and oversight from its political masters. In this regard, nothing looms as large as the darkest days of the Troubles.
Mick Clifford, Irish Examiner