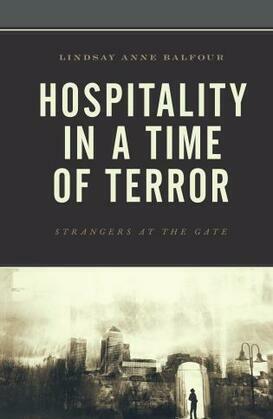 Hospitality in a Time of Terror

Hospitality in a Time of Terror: Strangers at the Gate offers a reading of hospitality that suggests the encounter with strangers is at the core of cultural production and culture itself in the aftermath of the terrorist attacks of September 11, 2001. It documents the significance of hospitality after the terrorist attacks, particularly as such an ethics is so provocatively raised or disavowed by a predominantly visual and cultural archive that has been and continues to be consumed by millions of people around the world. This book utilizes works of cultural memory, film, art and literature that show the breadth of hospitality’s influence but that offer a depth of insight, historical specificity, and theoretical intensity that only a product created in the aftermath of 9/11 allows. The September 11 Memorial and Museum in New York City, for example, is best understood as an institution defined by the question of hospitality, particularly as hospitality is engaged or disavowed through an experience with loss. This book also considers how hospitality might function in consideration of the violence perpetuated against bodies marked by discourses of race, gender, and sexuality, as is the case in the 2011 film, Zero Dark Thirty, and separately explores how alternative modes of hospitality are enabled by the fluid and dynamic space of the street and the urban art found there. The final chapter examines Don DeLillo's 2007 novel Falling Man, and argues that the novel demonstrates a sustained engagement with hospitality through the figure of organic shrapnel, a metaphor that suggests the possibility of being literally and figuratively embedded by another. The purpose of this book is to point out the diverse and even devastating ways that hospitality appears in ways that remind us that, if hospitality as we understand it is failing, it matters more than ever how we deploy it.