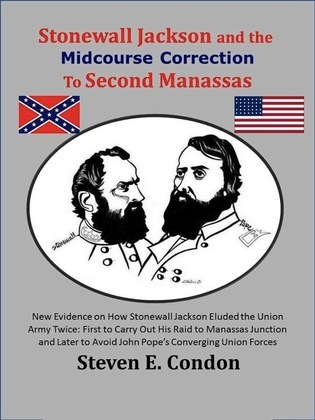 Stonewall Jackson and the Midcourse Correction to Second Manassas

This book presents new evidence revealing how Stonewall Jackson was able to elude the Union army twice: first to carry out his raid to Manassas Junction and later to avoid General John Pope's converging Union forces. It is an account full of surprises including a mistaken mountain, a warning that never was, and Union General John Pope's real plan for entrapping Jackson. It is all part of the untold story of the important Second Manassas Campaign (a.k.a. Second Bull Run). Second Manassas was the second of two consecutive campaigns orchestrated by Robert E. Lee by means of which he shifted the center of conflict in the Eastern Theater from the gates of Richmond, Virginia to the threshold of Washington, D.C., opening the way for Lee's first invasion of the North. This double-barreled achievement formed perhaps Lee's greatest accomplishment of the war and one with few parallels in military history.

The Second Manassas Campaign did much to enhance the reputations of Robert E. Lee and Stonewall Jackson. It also created the legend of Union General John Pope, the man whom they defeated. According to this legend John Pope was an army commander who was prone to make one boneheaded mistake after another, a general who was totally outclassed by his renowned opponents, and a general who afterwards lied to cover up his own incompetence. One can't discuss the magnitude of Lee and Jackson's achievement in winning the Second Manassas Campaign without addressing the competence of the man whom they defeated. Because of the fact that their victory was achieved by beating a man who for all intents and purposes demonstrated himself to be a second-rate general, Lee and Jackson's achievement—despite its far reaching consequences—has always attracted less attention than have Lee's campaigns that immediately preceded and followed it, The Seven Days and Antietam, respectively.

Recent research, however, reveals that John Pope was much more than a second-rate general, as is evidenced by a proper understanding of how he performed in the days immediately preceding the Second Battle of Manassas, days in which Stonewall Jackson's abilities shone brightly. This new and surprising research achieves two ends. First it provides the real explanation of how the great Stonewall Jackson accomplished one of his greatest feats. And secondly it demonstrates that Lee and Jackson defeated much more than a second-rate general, thus placing Lee and Jackson's victory in the Second Manassas Campaign in its true perspective and revealing it to be one of the greatest accomplishments achieved by this remarkable military duo.