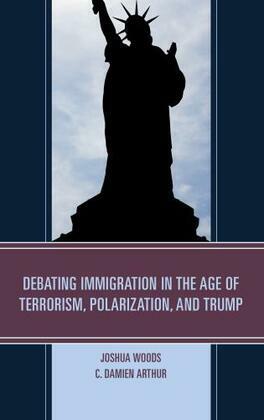 Debating Immigration in the Age of Terrorism, Polarization, and Trump

This book offers a broad interdisciplinary approach to the changes in the U.S. immigration debate before and after 9/11. A nation’s reaction to foreigners has as much to do with sociology as it does with political science, economics and psychology. Without drawing on this knowledge, our understanding of the immigration debate remains mundane, partial, and imperfect. Therefore, our story accounts for multiple factors, including culture and politics, power, organizations, social psychological processes, and political change. Examining this relationship in the contemporary context requires a lengthy voyage across academic disciplines, a synthesis of seemingly contradictory assumptions, and a grasp of research traditions so vast and confusing that an accurate rendering may seem implausible. And yet, to tell the story of the immigration debate in the age of terrorism, polarization, and Trump in any other way is to tell it in part.

The immigration debate in the United States has always been about openness. Two questions in particular—how open should the door be and what type of immigrant should walk through it—have characterized policy disputes for well over a century. In the current debate, expansionists want to see more legal immigrants in the U.S. and greater tolerance, if not respect, for immigrants. Restrictionists favor lower levels of immigration, stronger borders, and tighter law enforcement measures to stop the stream of ‘illegal’ migration and alleged crime. The aim of this book is to describe how these opposing views materialized in the news media, political rhetoric, and, ultimately, in policy. Much of our argument rests on the idea that history matters, that the dominant narrative about immigration is in constant flux, and that the ‘winner’ of the immigration debate is determined by a vector of contextual elements: the joint impact of current events, enduring traditions, and political-economic forces. Our approach to the immigration debate avoids deterministic claims and grand-scale projections. Although we argue with conviction that a climate of fear played an important role in shaping the debate, the fear itself and its effects on social attitudes and public policy were neither inevitable nor necessarily long lasting.