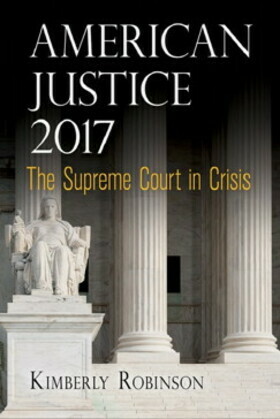 With the death of associate justice Antonin Scalia, the Supreme Court was plunged into crisis. Refusing to hold hearings or confirm the nominee of a Democratic president almost a year away from a presidential election, the Republican-controlled Senate held the court hostage, forcing it to do its work through nearly the entire term ending in June 2017 with just eight justices. In American Justice 2017: The Supreme Court in Crisis, Kimberly Robinson examines the way individual justices and the institution as a whole reacted to this unprecedented, politically fraught situation.

In public, the justices put on brave faces, waiting for the confirmation battle to play itself out, while indicating in occasional statements that the court would muddle through just fine. In private, though, things appear to have been more complicated. Narrow decisions, lackluster choice of cases, and odd bedfellows teaming up on the same sides of opinions and dissents give us a hint of the strenuous effort the eight justices made to uphold the integrity of the institution in the face of hurricane-force partisan gales.