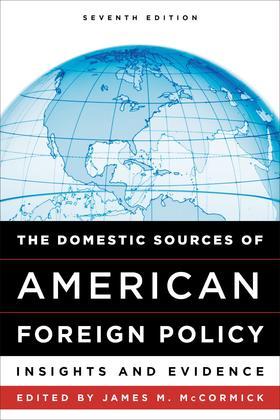 The seventh edition of this leading reader for courses in American foreign policy offers students an up-to-date, highly accessible introduction to the broad array of domestic factors influencing U.S. policymakers. James McCormick offers twenty-two carefully selected essays, more than half of which are new or revised. These current, insightful, and sometimes controversial essays are contributed by a distinguished group of scholars, journalists and public officials. The only reader to focus on domestic sources of American foreign policy, the book is organized into three thematic sections, each prefaced by a brief introduction written by the editor.Part one assesses how society contributes to foreign policy, part two examines the role of various political institutions and bureaucracies, and part three presents case studies of foreign policymaking that highlight the role of individual and group decision makers. Featuring nine new chapters, this lastest edition provides a detailed analysis of foreign policy from the Vietnam War through the end of the Obama administration.