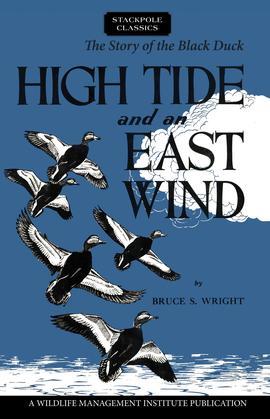 High Tide and an East Wind

Eastern waterfowlers, who know the black duck best, regard this big dusky bird as the top game bird against which all other ducks are measured. In parts of the Northeast this feeling of affection is so strong that in some circles only the black rates the name of "duck." All other species, even the famed canvasback, are "coots," "fish ducks," or are known by even less complimentary titles. Much of this devotion is justified. Without the black duck, wildfowling in much of the thickly settled East would be an unrewarding pastime. Big as a mallard, as wary as a Canada goose, and as handsome in full plumage as any duck that flies, the black duck fills a place on the American sporting scene that could be filled by no other waterfowl.
Here is the dramatic story of the life of the black duck, from the time the broods hatch on the spruce-lined ponds of eastern Canada, through the hazardous flights to the southern wintering areas, to the return of the paired birds to the nesting grounds in spring. It is a story told authoritatively by a Canadian scientist whose adult life has been spent in studying the black duck from the fastnesses of its northern breeding grounds in Labrador and Ungava Bay, to the marshes of Louisiana.
In this book are facts on the black and other species of waterfowl that will be new to many students of waterfowl as well as to sportsmen. Here also are recommendations for perpetuating the flights of these magnificent game birds.