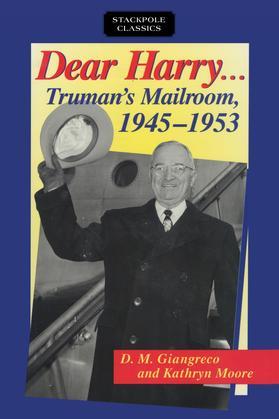 Americans are not particularly shy about letting politicians know what’s on their minds, and, in Harry Truman, they believed that they had a president they could level with. He even sometimes responded personally to them—especially on subjects he felt strongly about.
Today, it seems remarkable that a man who described the presidency as “the most awesome job in the world” would take the time to read and respond to White House mail. Truman, however, had an unquenchable thirst for what his everyday Americans” were thinking, yet distrusted opinion polls. For him, the daily stack of troubles and dreams from places like Skull Bone, Kentucky; Boise, Idaho; and Conway, Florida, provided the next best poll after the voting booth.
In Dear Harry, authors D. M. Giangreco and Kathryn Moore include a robust cross section of the thousands of messages sent to Truman. Juxtaposed with informative background essays, these letters provide an undiluted account of the greatest challenges confronting the U.S. during Truman’s administration, including civil rights, the Marshall Plan, the formation of Israel, the atomic bomb, the McCarthy hearings, the Korean War, and the General McArthur’s dismissal, which alone solicited more than 90,000 missives. While the majority of the letters are from private citizens, a sprinkling also come from the occasional bombastic senator and a few from the world figures, such as Winston Churchill (who liked to offer advice) and Chaim Weizmann. The names of some correspondents, such as J. Robert Oppenheimer, Upton Sinclair, Gene Tunney, would have been familiar to many of their fellow Americans, While others as diverse as Morey Amsterdam and Barry Goldwater would be better known to future generations.