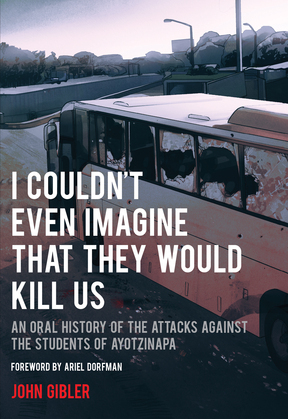 I Couldn't Even Imagine That They Would Kill Us

Harrowing personal narratives describing how Mexican authorities disappeared, killed, and injured scores of students and others in a still-unsolved crime.

"In Mexico, John Gibler's book has been recognized as a journalistic masterpiece, an instant classic, and the most powerful indictment available of the devastating state crime committed against the 43 disappeared Ayotizinapa students in Iguala. This meticulous, choral recreation of the events of that night is brilliantly vivid and alive, it will terrify and inspire you and shatter your heart."—Francisco Goldman, writer for The New Yorker, author of The Interior Circuit: A Mexico City Chronicle

On September 26, 2014, police in Iguala, Mexico attacked five busloads of students and a soccer team, killing six people and abducting forty-three students—now known as the Iguala 43—who have not been seen since. In a coordinated cover-up of the government's role in the massacre and forced disappearance, Mexican authorities tampered with evidence, tortured detainees, and thwarted international investigations. Within days of the atrocities, John Gibler traveled to the region and began reporting from the scene. Here he weaves the stories of survivors, eyewitnesses, and the parents of the disappeared into a tour de force of journalism, a heartbreaking account of events that reads with the momentum of a novel. A vital counter-narrative to state violence and impunity, the stories also offer a testament of hope from people who continue to demand accountability and justice.

John Gibler lives and writes in Mexico. He is the author of Mexico Unconquered: Chronicles of Power and Revolt, To Die in Mexico: Dispatches From Inside the Drug War, 20 poemas para ser leídos en una balacera, Tzompaxtle: La fuga de un guerrillero. His work on Ayotzinapa has been published in California Sunday Magazine, featured on NPR's "All Things Considered," and praised by The New Yorker.

More praise for John Gibler's I Couldn't Even Imagine That They Would Kill Us:

"The hideous Ayotzinapa atrocity reveals with vivid horror how Mexico is being destroyed by the US-based 'drug war' and its tentacles, penetrating deeply into the security system, business, and government, and strangling what is decent and hopeful in Mexican society. Gibler's remarkable investigations lift the veil from these terrible crimes and call for concerted action to extirpate the rotten roots and open the way for recovery from a grim fate."—Noam Chomsky

"Journalist Gibler delivers a meticulous and affecting recreation of the events of Sept. 26, 2014, in Iguala, Mexico, when police attacked five buses carrying students from the Ayotzinapa Teachers' College and a youth soccer team. . . . It's a heartbreaking reconstruction of a horrific event, made all the more profound by the persistent demand from the parents of the disappeared, their classmates, and citizens across country for the safe return of the students."--Publishers Weekly Starred Review

"An oral history of one horrific night when busloads of unarmed students were attacked by local Mexican police. . . . cumulatively very moving."--Kirkus Reviews

"A powerful and searing account of a devastating atrocity. Gibler's innovative style takes us on a compelling journey through a landscape of terror and brutality against those whose only crime was to demand the freedom to think."—Brad Evans, columnist on violence for the New York Times and the Los Angeles Review of Books

"We are fortunate to now have in English, John Gibler's courageous account and oral history of the 2014 atrocity in Mexico in which 43 students vanished from the face of the earth and remain absent, while six more people (three of them students) were found dead, one of them mutilated. The US 'war on drugs' has unleashed decades of unimaginable and hideous terrorism in Mexico, just as the 'war on terror' is doing in the Middle East. The cruel viciousness of Ayotzinapa, with the 48 families of all the disappeared, murdered, and critically wounded students insisting on answers from the Mexican government, opens the door to a powerful resistance movement, which also requires U.S. citizens to insist on ending the US war against the Mexican people, which began in the 1820s and has never abated."—Roxanne Dunbar-Ortiz, author of An Indigenous Peoples' History of the United States, and the forthcoming The US-Mexican War, 1846-1848

"The value of Gibler's book is not that he tells us or posits that that night (September 26-27, 2014) was a historical turning point. Instead, what is so astonishing is that, using documentary writing, he shows us how the protagonists of the events themselves discover suddenly that they live in a different world than the one they were used to only a few hours before. The book illustrates with precision the move from a Mexico before to a Mexico after that which we have decided to call 'Ayotzinapa.'"—Guillermo Espinosa Estrada, Horizontal