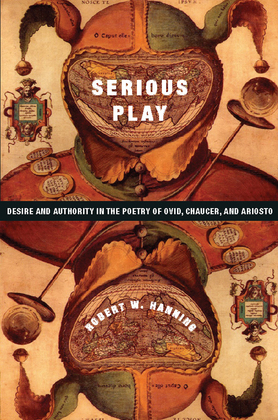 Serious Play: Desire and Authority in the Poetry of Ovid, Chaucer, and Ariosto

Comic poets are inspired best by the bittersweet nature of their art-the thrill of skewering the world's power elite while nevertheless being dependent on their support. Ovid, Chaucer, and Ariosto were extremely attuned to the dynamics of this relationship, with Ovid suffering most from his comedic missteps. Their audacity and acute insight are the very elements that make their work so appealing centuries after their subjects have stumbled off the stage.

Through a careful and imaginative analysis of Ovid's amatory poetry, Chaucer's dream poems and excerpts from the Canterbury Tales, and Ariosto's epic Orlando Furioso, Robert W. Hanning identifies the comic mastery that turns these poets' trenchant critique into such amusing, enlightening, and disturbing fantasy. This technique, termed serio ludere, or serious play, by Renaissance theorists, is especially compelling when studied through these writers and their politically powerful audiences. Ovid, Chaucer, and Ariosto are not often studied together, but each lived in exciting times (Augustan Rome, late-medieval London, and high-Renaissance Italy, respectively), and their unique position as outsider-insiders afforded them the freedom to speak comedic truth to power. These poets also rebelled against the "authority" of poetic influence in their work, remaking literary convention while, at the same time, challenging political power.