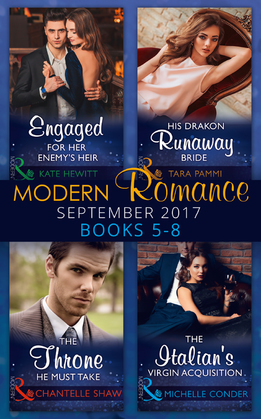 Four sexy stories perfect for any fan of romance!

Engaged for Her Enemy's Heir by Kate Hewitt

When ruthless Rafael Vitali learns the woman in his bed is the daughter of his sworn enemy, he can't get her out of his penthouse quick enough. But when Allegra reveals she's pregnant, Rafael seizes the opportunity to assert his control. He insists Allegra move to Sicily…as his wife!

Ariana Sakis walked out on Crown Prince Andreas Drakos, knowing her feelings were unrequited. For ten years she has hidden herself away, determined to never be made vulnerable by passion again…and believing herself divorced. Until her new wedding day is interrupted by Andreas himself, declaring them still married!

The Throne He Must Take by Chantelle Shaw

Playboy Jarek is no stranger to the darkness within him. Psychotherapist Dr. Holly Maitland is his chance to unlock the secrets from his past. But alone with Holly in the Austrian Alps, all Jarek can think about is peeling away her cool demeanor one tantalizing layer at a time!

Sebastiano Castiglione has a problem. His lifestyle of decadent hedonism has convinced his grandfather to retain control of the family dynasty – and to take what’s owed to him Bastian must prove he’s a changed man.

The sight of his stunning intern sparks an idea – and the flames of a burning desire! – but innocent Poppy Connolly will not become another Castiglione acquisition. However, she cannot refuse his offer of the chance to change her family’s life. Her response to his smouldering physicality is shocking– and it won’t be long before the molten heat of Bastian’s gaze melts away all her resistance…