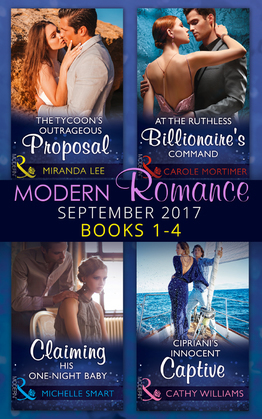 These best selling romance authors are back with four modern romances!

At the Ruthless Billionaire's Command by Carole Mortimer

Gregorio de la Cruz doesn't care if innocent Lia Fairbanks holds him responsible for ruining her life. But he can't get the fiery redhead out of his mind. He won't rest until he has Lia just where he wants her—ready and willing in his bed!

Australian tycoon and international playboy Byron Maddox is used to getting what he wants. And for some reason, he wants shy PA Cleo Shelton.

Cleo is sure it's only because she turned him down—finally free of an abusive marriage, Cleo is enjoying her independence, and has no intention of being under the thumb of another man! Especially a man she finds irresistibly alluring…

Seeing Natasha Pellegrini at her husband's funeral propels Matteo Manaserro back to a time before she shattered his trust. Caught in a potent mix of emotion, they surrender to their explosive passion…

One of Lucas Cipriani’s employees has information which could ruin a vital takeover—and he’s furious! The only way to handle temptress Katy Brennan is to hold her captive on his yacht for a fortnight, cut off from the world until the deal is complete…