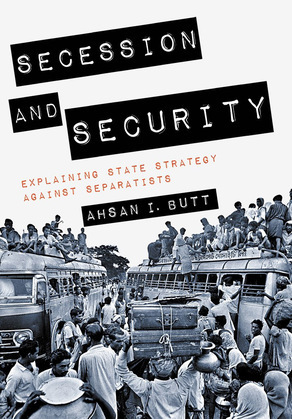 "The book is an excellent addition to the scholarly literature on subnational movements, both past and present, offering a range of insights to policymakers across the globe."—Ayesha Jalal, author of The Struggle for Pakistan "With judicious use of empirical evidence and rich case studies, Ahsan I. Butt makes a compelling case that states’ responses to secessionist movements turn to a considerable degree on their external security environments."—S. Paul Kapur, author of Jihad as Grand Strategy

In Secession and Security, Ahsan I. Butt argues that states, rather than separatists, determine whether a secessionist struggle will be peaceful, violent, or genocidal. He investigates the strategies, ranging from negotiated concessions to large-scale repression, adopted by states in response to separatist movements. Variations in the external security environment, Butt argues, influenced the leaders of the Ottoman Empire to use peaceful concessions against Armenians in 1908 but escalated to genocide against the same community in 1915; caused Israel to reject a Palestinian state in the 1990s; and shaped peaceful splits in Czechoslovakia in 1993 and the Norway-Sweden union in 1905.

Using more than one hundred interviews and extensive archival data, Butt focuses on two main cases—Pakistani reactions to Bengali and Baloch demands for independence in the 1970s and India’s responses to secessionist movements in Kashmir, Punjab, and Assam in the 1980s and 1990s. Butt’s deep historical approach to his subject will appeal to policymakers and observers interested in the last five decades of geopolitics in South Asia, the contemporary Israeli-Palestinian conflict, and ethno-national conflict, separatism, and nationalism more generally.