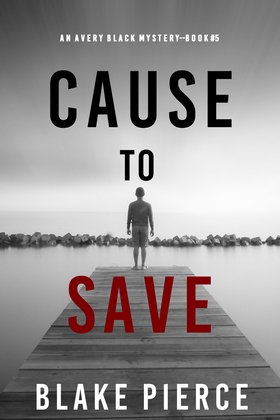 Cause to Save (An Avery Black Mystery--Book 5)

"A dynamic story line that grips from the first chapter and doesn't let go."
--Midwest Book Review, Diane Donovan (regarding Once Gone)

From #1 bestselling author Blake Pierce comes a new masterpiece of psychological suspense: CAUSE TO SAVE (An Avery Black Mystery--Book 5)--the final installment in the Avery Black series.

In the epic finale of the Avery Black series, serial killer Howard Randall has escaped, and the entire city of Boston is on edge. Women are turning up gruesomely murdered, and everyone suspects Howard is at it again.

When Boston's most brilliant and controversial homicide detective--Avery Black--is herself stalked--and when people close to her are brutally killed, one by one--it seems the city's worst fears are confirmed.

The most riveting and shocking book of the series, a psychological thriller with heart-pounding suspense, CAUSE TO SAVE is the finale that will leave you turning pages late into the night.

"A masterpiece of thriller and mystery. Pierce did a magnificent job developing characters with a psychological side, so well described that we feel inside their minds, follow their fears and cheer for their success. The plot is very intelligent and will keep you entertained throughout the book. Full of twists, this book will keep you awake until the turn of the last page."
--Books and Movie Reviews, Roberto Mattos (re Once Gone)