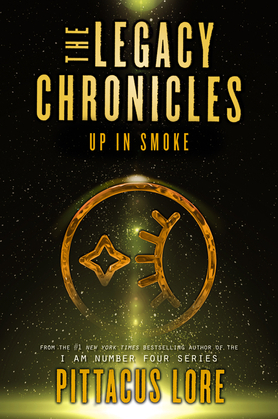 The Legacy Chronicles: Up in Smoke

The X-Files meets The X-Men in this digital original companion series that's set in the world of Pittacus Lore’s #1 New York Times bestselling I Am Number Four series and coincides with Generation One.

This is the third 100-page novella, continuing the exciting story of fan favorite characters Six and Sam. Following their dangerous battle in the mountains of Montana, the couple has now been ripped apart.

Sam is imprisoned aboard a ship that’s miles off the coast of Mexico. His Legacies have been taken away from him. He doesn’t have any back-up. And if he can’t find a way to free himself soon, he’s going to become a lab experiment.

Although safely recovering at the Human Garde Academy, Six has had her abilities stripped as well. Ignoring everyone’s warnings, though, she decides to mount a rescue mission with the help of Nine and her young charge Nemo. But it’s three of them versus who knows how many teens with Legacies who may be working for their enemy….

Six and Sam may no longer have their powers, but does it mean they’re truly powerless?