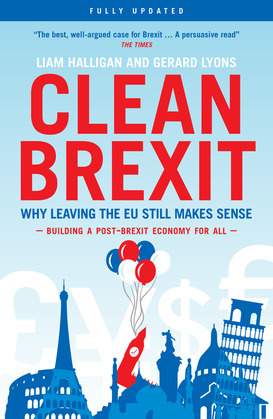 In this optimistic and inclusive guide, Sunday Telegraph columnist Liam Halligan and renowned economic forecaster Gerard Lyons cut through the complexity and spin to offer a vision of how Britain, and the world, can make a great success of Brexit.

‘We are linked to Europe, but not combined,’ wrote Winston Churchill in 1930. To Halligan and Lyons, this sentiment rings true. And that if the Article 50 negotiations go well, Clean Brexit argues, the UK could become an inspiration, a source of strength for voters elsewhere in Europe who have long demanded EU reform, but been rebuffed.

From manufacturing, fishing, banking, universities, travel, immigration, Scottish independence and the spectre of renewed tension between Northern Ireland and the Irish Republic, to ongoing trade and good relations with our EU neighbours and the rest of the world, Clean Brexit provides answers to the questions hanging over all these issues, and many more.

Unashamedly optimistic about Britain’s future, Clean Brexit draws on extensive discussions with leading politicians and diplomats across the UK, Europe and the world to argue that leaving the EU provides an opportunity for the UK to re-invent its economy, while reclaiming our place as a premier global trading nation.