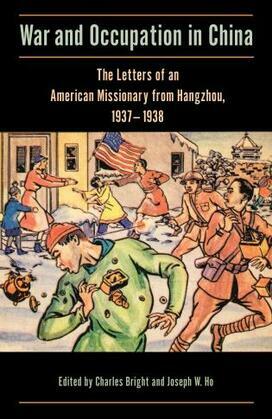 War and Occupation in China

A fresh eyewitness account of the Japanese invasion of mid-China in 1937-1938, these letters by an American missionary in Hangzhou provide a vividly detailed, first-hand account of the spread of war from Shanghai across the Yangzi valley and the subsequent ordeals of military occupation seen against the better-known backdrop of the Nanjing Massacre – one man’s embedded experience in one major Chinese city of one chaotic year of war.

Already 25 years in Republican China and fluent in the language when the Japanese arrived, the author was well-placed as both an observer of, and participant in harrowing events – the provost of the Hangzhou Christian College and responsible for its campus, president of the local Red Cross which organized refugee camps and shelter for those displaced by the looting and raping that ensued, and chairman of an International Committee which sought to mediate between Japanese and Chinese forces in an effort to limit destruction and then to negotiate with the occupation regime on a day-to-day basis. The letters – written twice weekly – describe pitched battles and aerial bombing, the fearful conditions of civilian refugees, the exigencies of the missionary enterprise and the experiences of foreign neutrals in wartime China, as well as the practical dilemmas of collaboration that arose under occupation – moving about, protecting refugees, procuring food, tending a dairy herd, and ministering to embattled congregations.

The letters are fully annotated to give readers a fuller perspective on places, people, and events that surround the eyewitness accounts. A substantially researched introductory essay provides necessary historical background and situates the author in a longer missionary career that began in 1911 and ended with wartime internment in 1943.