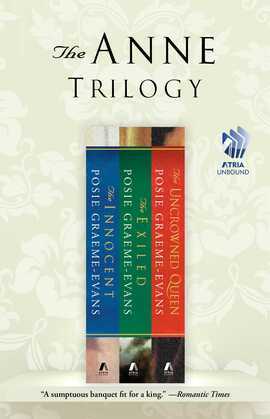 Three glorious novels in one package. The Innocent, The Exiled, and The Uncrowned Queen follow the life of Anne de Bohun, a beautiful, spirited young woman who captures the heart of King Edward IV, as he defends his throne in the devastating War of the Roses. Also included in this special ebook collection?an Introduction by the author with four-color photos and a behind-the-scenes look at the making of the trilogy.

The Innocent: The year is 1450, a dangerous time in medieval Britain. Civil unrest is at its peak and the legitimacy of the royal family is suspect. Meanwhile, deep in the forests of western England, a baby is born. Powerful forces plot to kill both mother and child, but somehow the newborn girl survives. Her name is Anne. Fifteen years later, England emerges into a fragile but hopeful new age, with the charismatic young King Edward IV on the throne. Anne, now a young peasant girl, joins the household of a wealthy London merchant. Her unusual beauty provokes jealousy, lust, and intrigue, but Anne has a special quality that saves her: a vast knowledge of healing herbs. News of her extraordinary gift spreads, and she is called upon to save the ailing queen. Soon after, Anne is moved into the palace, where she finds her destiny with the man who will become the greatest love of her life?the king himself.

The Exiled: The enchanting Anne faces the challenge of raising her child in exile. Always resourceful, she flourishes as a merchant and is able to support her household. But Anne has a secret that her enemies could use to destroy her. Her beloved son is the product of a passionate affair with the king, Edward IV, who knows nothing of his existence. If this information were to fall into the wrong hands, it could prove lethal for Anne and her child. She struggles to find peace in a world of duplicity and suspicion, where adversaries masquerade as allies, and someone very powerful wants her dead. Yet, despite the pressure of her enemies, what pains Anne the most is that she is unsure when or if she will see her darling Edward again.

The Uncrowned Queen: As England tears itself apart in the War of the Roses, Anne de Bohun lives far from the intrigues of cities and courts. Once King Edward IV's mistress, she has found safety with their son in Brugge. But now Edward himself is a hunted fugitive, and Anne's real father, King Henry VI, rules again from Westminster. Summoned by an enigmatic message from her lover, Anne is drawn once more to the passion, the excitement, and the deadly danger that Edward brings into her life. But now, the girl who was once a penniless servant has a child to protect and an inheritance to defend. Can she let her love for Edward threaten everything she has? Or will she need his help to protect her from the powerful enemy who means to destroy her?