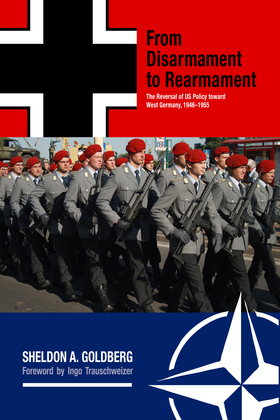 From Disarmament to Rearmament

by Sheldon A. Goldberg (Author)
Nonfiction History History by country United States Other Military Europe 1945-1989
EPUB
Unlimited loans, One at a time
Details

At the end of World War II, the Allies were unanimous in their determination to disarm the former aggressor Germany. As the Cold War intensified, however, the decision whether to reverse that policy and to rearm West Germany as a bulwark against the Soviet threat led to disagreements both within the U.S. government and among members of the nascent NATO alliance. The U.S. military took the practical view that a substantial number of German troops would be required to deter any potential Soviet assault. The State Department, on the other hand, initially advocated an alternative strategy of strengthening European institutions but eventually came around to the military’s position that an armed West Germany was preferable to a weak state on the dividing line between the Western democracies and the Soviet satellite states.

Sheldon A. Goldberg traces the military, diplomatic, and political threads of postwar policy toward West Germany and provides insights into the inner workings of alliance building and the roles of bureaucrats and military officers as well as those of diplomats and statesmen. He draws on previously unexamined primary sources to construct a cogent account of the political and diplomatic negotiations that led to West Germany’s accession to NATO and the shaping of European order for the next forty years.