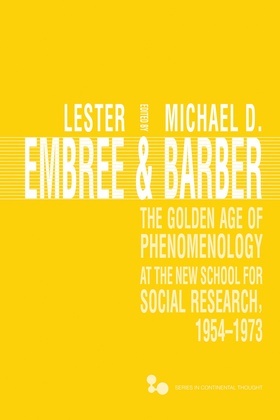 The Golden Age of Phenomenology at the New School for Social Research, 1954–1973

This collection focuses on the introduction of phenomenology to the United States by the community of scholars who taught and studied at the New School for Social Research from 1954 through 1973. During those years, Dorion Cairns, Alfred Schutz, and Aron Gurwitsch—all former students of Edmund Husserl—came together in the department of philosophy to establish the first locus of phenomenology scholarship in the country. This founding trio was soon joined by three other prominent scholars in the field: Werner Marx, Thomas M. Seebohm, and J. N. Mohanty. The Husserlian phenomenology that they brought to the New School has subsequently spread through the Anglophone world as the tradition of Continental philosophy.

The first part of this volume includes original works by each of these six influential teachers of phenomenology, introduced either by one of their students or, in the case of Seebohm and Mohanty, by the thinkers themselves. The second part comprises contributions from twelve leading scholars of phenomenology who trained at the New School during this period. The result is a powerful document tracing the lineage and development of phenomenology in the North American context, written by members of the first two generations of scholars who shaped the field.