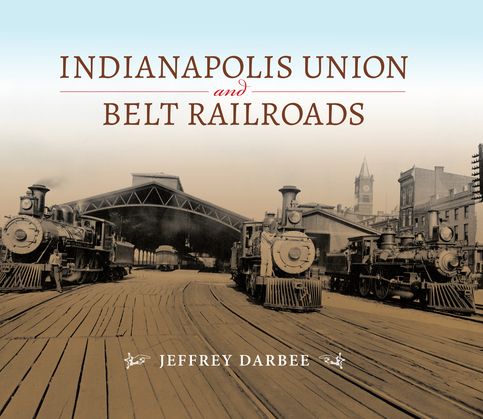 In an era dominated by huge railroad corporations, Indianapolis Union and Belt Railroads reveals the important role two small railroad companies had on development and progress in the Hoosier State. After Indianapolis was founded in 1821, early settlers struggled to move people and goods to and from the city, with no water transport nearby and inadequate road systems around the state. But in 1847, the Madison & Indianapolis Railroad connected the new capital city to the Ohio River and kicked off a railroad and transportation boom. Over the next seven decades, the Indiana railroad map expanded in all directions, and Indianapolis became a rail transport hub, dubbing itself the "Railroad City." Though the Pennsylvania and the New York Central Railroads traditionally dominated the Midwest and Northeast and operated the majority of rail routes radiating from Indianapolis, these companies could not have succeeded without the two small railroads that connected them.

In the downtown area, the Indianapolis Union Railway was less than 2 miles long, and out at the edge of town the Belt Railroad was only a little over 14 miles. Though small in size, the Union and the Belt had an outsized impact, both on the city’s rail network and on the city itself. It played an important role both in maximizing the efficiency and value of the city’s railroad freight and passenger services and in helping to shape the urban form of Indianapolis in ways that remain visible today.