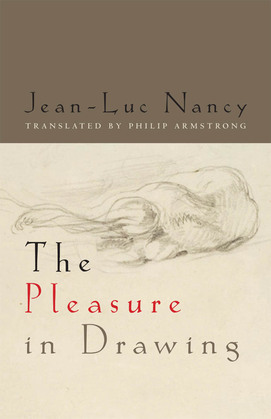 The Pleasure in Drawing

Originally written for an exhibition Jean-Luc Nancy curated at the Museum of Fine Arts in Lyon in 2007, this book addresses the medium of drawing in light of the question of form?of form in its formation, as a formative force, as a birth to form. In this sense, drawing opens less toward its achievement, intention, and accomplishment than toward a finality without end and the infinite renewal of ends, toward lines of sense marked by tracings, suspensions, and permanent interruptions.

Recalling that drawing and design were once used interchangeably, Nancy notes that drawing designates a design that remains without project, plan, or intention. His argument offers a way of rethinking a number of historical terms (sketch, draft, outline, plan, mark, notation), which includes rethinking drawing in its graphic,filmic, choreographic, poetic, melodic, and rhythmic senses.

If drawing is not reducible to any form of closure, it never resolves a tension specific to itself. Rather, drawing allows the pleasure in and of drawing, the gesture of a desire that remains in excess of all knowledge, to come to appearance. Situating drawing in these terms, Nancy engages a number of texts in which Freud addresses the force of desire in the rapport between aesthetic and sexual pleasure, texts that also turn around questions concerning form in its formation, form as a formative force. Between the sections of the text, Nancy has placed a series of ?sketchbooks? on drawing, composed of a broad range of quotations on art from different writers, artists, or philosophers.