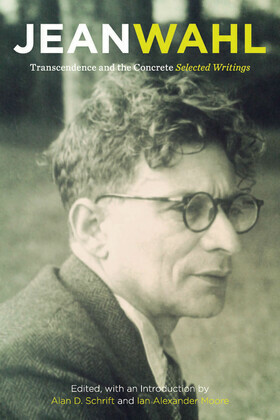 Transcendence and the Concrete

Jean Wahl (1888–1974), once considered by the likes of Georges Bataille, Gilles Deleuze, Emmanuel Levinas, and Gabriel Marcel to be among the greatest French philosophers, has today nearly been forgotten outside France. Yet his influence on French philosophical thought can hardly be overestimated. Levinas wrote that “during over a half century of teaching and research, [Wahl] was the life force of the academic, extra-academic, and even, to a degree anti-academic philosophy necessary to a great culture.” And Deleuze, for his part, commented that “Apart from Sartre, who remained caught none the less in the trap of the verb to be, the most important philosopher in France was Jean Wahl.”

Besides engaging with the likes of Bataille, Bergson, Deleuze, Derrida, Levinas, Maritain, and Sartre, Wahl also played a significant role, in some cases almost singlehandedly, in introducing French philosophy to movements like existentialism, and American pragmatism and literature, and thinkers like Hegel, Kierkegaard, Nietzsche, Jaspers, and Heidegger. Yet Wahl was also an original philosopher and poet in his own right. This volume of selections from Wahl’s philosophical writings makes a selection of his most important work available to the English-speaking philosophical community for the first time.

Jean Wahl was Professor of Philosophy at the Sorbonne from 1936 to 1967, save during World War II, which he spent in the United States, having escaped from the Drancy internment camp. His books to appear in English include The Pluralist Philosophies of England and America (Open Court, 1925), The Philosopher's Way (Oxford UP, 1948), A Short History of Existentialism (Philosophical Library, 1949), and Philosophies of Existence (Schocken, 1969).