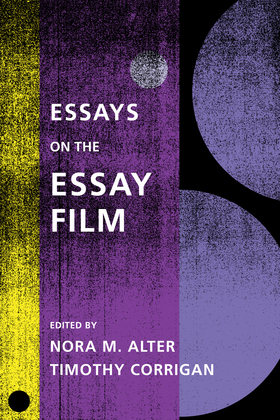 Essays on the Essay Film

The essay—with its emphasis on the provisional and explorative rather than on definitive statements—has evolved from its literary beginnings and is now found in all mediums, including film. Today, the essay film is, arguably, one of the most widely acclaimed and critically discussed forms of filmmaking around the world, with practitioners such as Chris Marker, Hito Steyerl, Errol Morris, Trinh T. Minh-ha, and Rithy Panh. Characteristics of the essay film include the blending of fact and fiction, the mixing of art- and documentary-film styles, the foregrounding of subjective points of view, a concentration on public life, a tension between acoustic and visual discourses, and a dialogic encounter with audiences.

This anthology of fundamental statements on the essay film offers a range of crucial historical and philosophical perspectives. It provides early critical articulations of the essay film as it evolved through the 1950s and 1960s, key contemporary scholarly essays, and a selection of writings by essay filmmakers. It features texts on the foundations of the essay film by writers such as Hans Richter and André Bazin; contemporary positions by, among others, Phillip Lopate and Michael Renov; and original essays by filmmakers themselves, including Laura Mulvey and Isaac Julien.