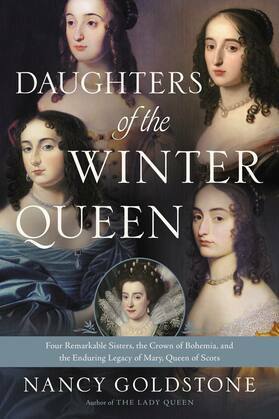 Daughters of the Winter Queen

From the author of The Rival Queens, a lively group biography of Elizabeth Stuart, the Winter Queen, and her four daughters, whose lives paint a vivid picture of the upheavals of 17th-century Europe

Set in the tumultuous seventeenth century, DAUGHTERS OF THE WINTER QUEEN tells the delicious and dramatic stories of Elizabeth Stuart, the Winter Queen--granddaughter of the doomed Mary, Queen of Scots--and her four unforgettable daughters.

Like Austen's Bennets or Louisa May Alcott's Marches, each sister had a unique attribute that set her apart from the rest: Elizabeth was the scholar, Louise the artist, Henrietta the beauty, and Sophia the writer. But unlike those fictional heroines, the daughters of the Winter Queen lived on a much grander scale. Their backdrop was all of Europe and the twists of their stories trace the course of history itself.

Their journey begins in Scotland and England and sweeps through the great courts and palaces of Europe and encompasses warfare, political intrigue, illicit love affairs, devastating betrayal, hard-won triumph, and even a murder mystery.

DAUGHTERS OF THE WINTER QUEEN is the saga of five extraordinary women and a family that, by refusing to surrender, survived to change the shape of our world.