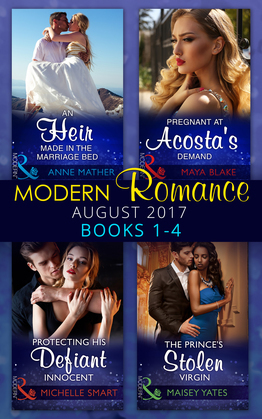 An Heir Made in the Marriage Bed by Anne Mather

One night back in her husband's bed…

The inability to have a child left Joanna and Matt Novak's passionate marriage in tatters. But when Joanna asks her tycoon husband for a divorce, Matt makes it clear he expects them to remain married…in the most intimate of ways!

As tempers flare, the raging desire between them explodes – just once more, Matt and Joanna give in to the thrill of each other's touch.

In the shattering aftermath of their explosive encounter, they agree to part ways…until Joanna discovers one tiny consequence of their night together – she's carrying Matt's baby!

Awakened by his kiss…

Ordinary Briar Harcourt is horrified to discover her life is a lie—she is in fact a long-lost princess, sent into hiding to escape a forced marriage to a brutal king. But now his son, Prince Felipe, has found Briar and is determined to claim her as his bride!

Marriage to Briar will give Felipe the power he was born for: her compliance is nonnegotiable. But his searing, uncontrollable desire for her is unexpected…and he'll use all his formidable charisma to seduce her into surrender!

Tempted by her billionaire protector…

Traveling to a dangerous Caribbean island to continue her late brother's charitable work, Francesca Pellegrini finds herself under the protection of security tycoon Felipe Lorenzi. Independent Francesca is infuriated by his commands, but Felipe's every look invites her to give up her innocence to him…

With his body and heart as hard as stone after his military career, Felipe has no time for Francesca's seductive games. Until this captivating young woman entices him beyond all measure, and this lone wolf decides to throw away his strict rules and take her as his own!