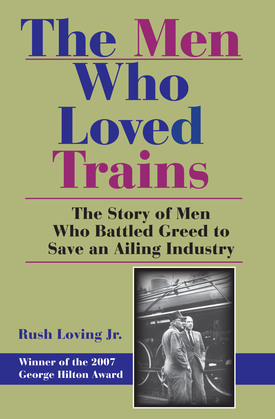 The Men Who Loved Trains: The Story of Men Who Battled Greed to Save an Ailing Industry

A saga about one of the oldest and most romantic enterprises in the land-America's railroads-The Men Who Loved Trains introduces some of the most dynamic businessmen in America. Here are the chieftains who have run the railroads, including those who set about grabbing power and big salaries for themselves, and others who truly loved the industry.

As a journalist and associate editor of Fortune magazine who covered the demise of Penn Central and the creation of Conrail, Rush Loving often had a front row seat to the foibles and follies of this group of men. He uncovers intrigue, greed, lust for power, boardroom battles, and takeover wars and turns them into a page-turning story for readers.

Included is the story of how the chairman of CSX Corporation, who later became George W. Bush's Treasury secretary, was inept as a manager but managed to make millions for himself while his company drifted in chaos. Men such as he were shy of scruples, yet there were also those who loved trains and railroading, and who played key roles in reshaping transportation in the northeastern United States. This book will delight not only the rail fan, but anyone interested in American business and history.