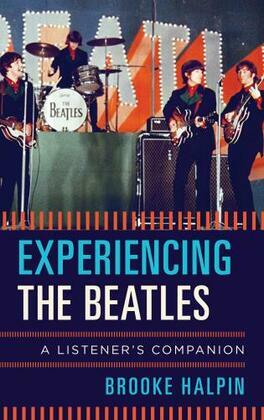 Starting an undeniable revolution, the Beatles took pop culture by storm, shook up the recording industry, and provided a soundtrack for the lives of millions of American teenagers. No band would ever come close to the mania inspired by these four Liverpudlian exports.

Brooke Halpin takes readers on a comprehensive tour behind the masterful instrumentation, timeless (yet sometimes mysterious) lyrics, and experimental recording techniques of the Beatles’ American releases from 1964 through 1970. Halpin explores the rock covers from which the four lads launched their careers; the original rock ‘n’ roll and love songs that fueled Beatlemania; the theatrical, psychedelic, world music, and orchestral elements which continually surprised audiences about the depths of the band’s talents, and the guest musicians whose contributions remain unknown to many listeners. Adding to the song analyses are personal vignettes to transport the reader back in time to experience the excitement of hearing the Beatles for the first time.

Through their music, lyrics, and playful antics on stage and screen as well as in real life, the Beatles encapsulated the ups and downs of 1960s America. Halpin uncovers how the Beatles’ music continues to be relevant to today’s audiences, revealing little known facts and drawing exciting conclusions about the band, their eventual breakup, and their undiminished fame.