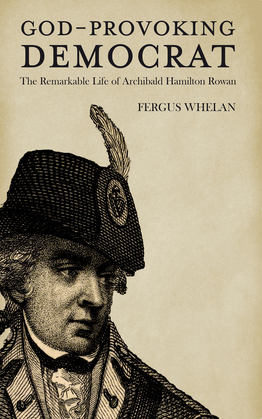 ‘I have seen many, very many United Irishmen, and with a few exceptions they are . . . the most God-provoking Democrats on this side of Hell.’

Born into the Anglo-Irish landowning class of Co. Down, Archibald Hamilton Rowan (1751–1832) led a colourful life. Heavily influenced by the celebrated radical John Jebb at Cambridge, and the revolutionary thinker Mary Wollstonecraft, he made waves throughout his career, weathering the wrath of his own class as he championed the causes of the poor and oppressed. Of a passionate disposition, he was involved in several duels, denounced the military for shooting dead tradesmen in Dublin for bull-baiting, and as a young man was liable to getting into ‘scrapes with married women’.

He was a founding member of the United Irish Society, and imprisoned in 1794, but he managed to escape in a fishing vessel. He then endured eleven years of hardship in France, Germany and America before his tenacious wife, Sarah Dawson, managed to secure him a pardon and he returned to Ireland in 1806.