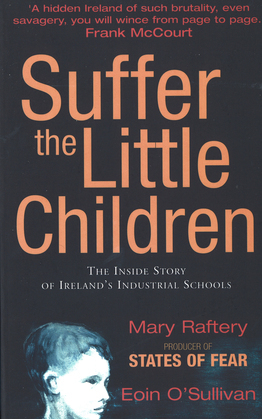 Up until the late sixties in Ireland, thousands of young children were sent to what were called industrial schools, financed by the Department of Education, and operated by various religious orders of the Catholic Church. Popular belief held that these schools were orphanages or detention centers, when in reality most of the children ended up at the schools because their parents were too poor to care for them. Mary Raftery’s award-winning three-part TV series on the industrial schools, States of Fear, shocked Ireland when broadcast on RTE, prompting an unprecedented response in Ireland. Hundreds of people phoned RTE, spoke on radio stations and wrote to newspapers to share their own memories of their local industrial schools. Pages of newsprint were devoted to the issues raised by the series, and on the 11th of May, the airdate of the final segment of the trilogy, the Taoiseach issued an historic apology on behalf of the state to the victims of child abuse within the system.

Now, together with Dr. Eoin O’Sullivan, Raftery delves even further into this horrifying chapter of Irish life, revealing for the first time new information from official Department of Education files not accessible during the making of the documentaries. It contains much new material, including startling research showing a level of awareness of child sexual abuse going back over sixty years, particularly within the Christian Brothers. The dissection of these official records, detailing sexual abuse, starvation, physical abuse, and neglect, together with extensive testimony from those who grew up in industrial schools convey both the extraordinary levels of cruelty and suffering experienced by these children, and their tremendous courage and resilience in surviving the often savage way in which they were abused.A definitive history of industrial schools in Ireland, Suffer the Little Children offers a unique insight into the minds of government officials and religious orders who ran this vast system. First-hand testimony from the survivors of the schools punctuates the narrative, providing a stark and revealing picture of stolen childhood.