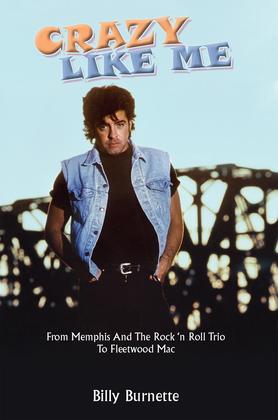 Crazy Like Me: From Memphis and the Rock 'n Roll Trio to Fleetwood Mac

Billy Burnette is the epitome of a rock star – he exudes talent, good looks, and the rock star aura wherever he goes and understandably so, given his journey as a musician, singer, songwriter, guitarist.

Born in Memphis, singer/songwriter/guitarist, Dorsey William Burnette III (aka Billy Burnette) spent most of his youth in the presence of father Dorsey and uncle Johnny (of the legendary Rock and Roll Trio). The Trio made the Rockabilly name famous by combining the name Billy and his cousin Rocky for the 1953 “Rockabilly Boogie” – thus making the term Rockabilly a household name.

The legendary Rock and Roll Trio influenced a diverse array of Rock icons including: the Elvis, Beatles, Led Zeppelin, Rod Stewart, Aerosmith, and Ricky Nelson. Elvis used to spend many evenings jamming with the band in the Lauderdale Courts laundry room. Recounts Billy: “I met Paul McCartney once and he said that the Trio were one of his and John’s (Lennon’s) influences – nobody was making music like that back then.”

It’s not surprising given his upbringing that Billy’s list of accomplishments in the music arena is both impressive and diverse. Billy has amassed four decades of experience recording music, writing songs, and performing since embarking upon his career at age 7.

In his mid-teens, Billy picked up a guitar and began writing songs. Heavily influenced by the Beatles, Delaney, Bonnie & Friends, and his dad’s music, Billy learned the songwriting craft from some of the greats. “It’s really funny because I grew up thinking that everyone wrote songs. I mean my dad did it, my uncle did it…”

At 18, Billy was only a week out of high school when he recorded his Columbia Records album with famed Memphis hit-making producer Chips Moman (“Suspicious Minds” and “In the Ghetto” for Elvis, multiple hits for Aretha Franklin and BJ Thomas).

By 1985, Burnette signed with MCA/Curb. During that year, he was nominated as “Best New Male Vocalist” by the Academy of Country Music in competition against Randy Travis, Keith Whitley, Marty Stuart and T. Graham Brown.

His promising Country music career took a sudden turn with one phone call. Burnette tells the story: “I was in an LA studio with Roy Orbison cutting a song I’d written, “Dream You,” for the Mystery Girl album when Mick (Fleetwood) called and asked me to join Fleetwood Mac.” With a number one record worldwide and a sold out world tour, Billy began his journey as a member of one of the greatest rock bands of all time. He toured with Fleetwood Mac between 1987-1995 and appears on such albums including The Chain, Fleetwood Mac/Greatest Hits, Behind the Mask and The Very Best of Fleetwood Mac.

He has worked with John Fogerty and Bob Dylan, and recorded a country duet album with Bekka Bramlett. He has written hit songs for George Strait and Faith Hill, and has his own solo career going strong, with the release of his latest album, "Crazy Like Me" and a book by the same title.