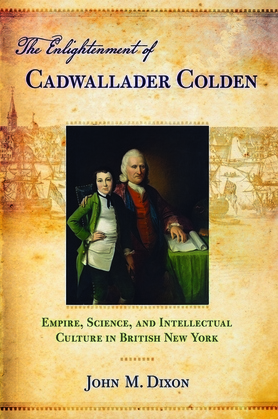 The Enlightenment of Cadwallader Colden

Was there a conservative Enlightenment? Could a self-proclaimed man of learning and progressive science also have been an agent of monarchy and reaction? Cadwallader Colden (1688–1776), an educated Scottish emigrant and powerful colonial politician, was at the forefront of American intellectual culture in the mid-eighteenth century. While living in rural New York, he recruited family, friends, servants, and slaves into multiple scientific ventures and built a transatlantic network of contacts and correspondents that included Benjamin Franklin and Carl Linnaeus. Over several decades, Colden pioneered colonial botany, produced new theories of animal and human physiology, authored an influential history of the Iroquois, and developed bold new principles of physics and an engaging explanation of the cause of gravity.

The Enlightenment of Cadwallader Colden traces the life and ideas of this fascinating and controversial "gentleman-scholar." John M. Dixon's lively and accessible account explores the overlapping ideological, social, and political worlds of this earliest of New York intellectuals. Colden and other learned colonials used intellectual practices to assert their gentility and establish their social and political superiority, but their elitist claims to cultural authority remained flimsy and open to widespread local derision. Although Colden, who governed New York as an unpopular Crown loyalist during the imperial crises of the 1760s and 1770s, was brutally lampooned by the New York press, his scientific work, which was published in Europe, raised the international profile of American intellectualism.