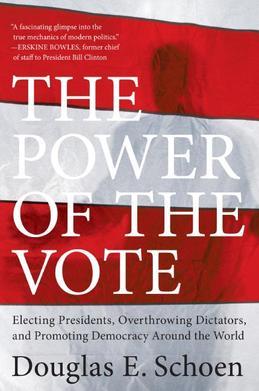 The Power of the Vote

One of the Democratic Party’s most successful strategists tells the inside stories of his most dramatic victories and failures, while illustrating how technology and politics merged to change the political process in America.

For the last 30 years, Douglas E. Schoen has been one of the most innovative people in Democratic politics, working behind the scenes as a political strategist for some of the world’s most influential and respected politicians. In The Power of the Vote, he offers a revealing glimpse inside his most pivotal campaigns and provides an essential primer for understanding elections of yesterday, today, and tomorrow. From the legendary 1977 New York City mayoral race to Bill Clinton’s reelection campaign in 1996 to Jon Corzine’s stunning victory in the 2000 New Jersey Senate race, Schoen explains his rise to electoral success, examining how his efforts with voter polling revolutionized the practice of democracy in America.

Complete with a discussion of the strategies and tactics that will lead the Democrats back to the White House in 2008, this book is a true insider’s tale from one of Washington’s most successful and respected personalities.