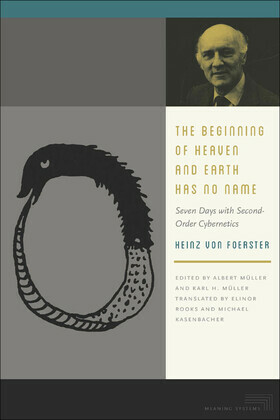 The Beginning of Heaven and Earth Has No Name: Seven Days with Second-Order Cybernetics

Heinz von Foerster was the inventor of second-order cybernetics, which recognizes the investigator as part of the system he is investigating. The Beginning of Heaven and Earth Has No Name provides an accessible, nonmathematical, and comprehensive overview of von Foerster's cybernetic ideas and of the philosophy latent within them. It distills concepts scattered across the lifework of this scientific polymath and influential interdisciplinarian. At the same time, as a book-length interview, it does justice to von Foerster's élan as a speaker and improviser, his skill as a raconteur. Developed from a week-long conversation between the editors and von Foerster near the end of his life, this work playfully engages von Foerster in developing the difference his notion of second-order cybernetics makes for topics ranging from emergence, life, order, and thermodynamics to observation, recursion, cognition, perception, memory, and communication. The book gives an English-speaking audience a new ease of access to the rich thought and generous spirit of this remarkable and protean thinker.