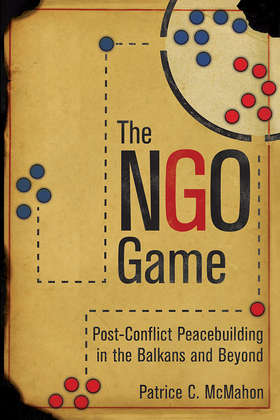 In most post-conflict countries nongovernmental organizations are everywhere, but their presence is misunderstood. In The NGO Game Patrice McMahon investigates the unintended outcomes of what she calls the NGO boom in Bosnia and Kosovo. Using her years of fieldwork and interviews, McMahon argues that when international actors try to rebuild and reconstruct post-conflict countries, they often rely on and look to NGOs. Although policymakers and scholars tend to accept and even celebrate NGO involvement in post-conflict and transitioning countries, they rarely examine why NGOs have become so popular, what NGOs do, or how they affect everyday life.

After a conflict, international NGOs descend on a country, local NGOs pop up everywhere, and money and energy flow into strengthening the organizations. In time, the frenzy of activity slows, the internationals go home, local groups disappear from sight, and the NGO boom goes bust. Instead of peace and stability, the embrace of NGOs and the enthusiasm for international peacebuilding turns to disappointment, if not cynicism. For many in the Balkans and other post-conflict environments, NGOs are not an aid to building a lasting peace but are part of the problem because of the turmoil they foster during their life cycles in a given country. The NGO Game will be useful to practitioners and policymakers interested in improving peacebuilding, the role of NGOs in peace and development, and the sustainability of local initiatives in post-conflict countries.