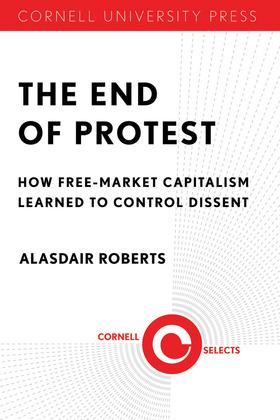 The End of Protest

The United States has just gone through the worst economic crisis in a generation. Why was there not more protest, as there was in other countries? During the United States’ last great era of free-market policies, before World War II, economic crises were always accompanied by unrest. “The history of capitalism,” the economist Joseph Schumpeter warned in 1942, “is studded with violent bursts and catastrophes.” In The End of Protest, Alasdair Roberts explains how, in the modern age, governments learned to unleash market forces while also avoiding protest about the market’s failures.

Roberts argues that in the last three decades, the two countries that led the free-market revolution—the United States and Britain—have invented new strategies for dealing with unrest over free market policies. The organizing capacity of unions has been undermined so that it is harder to mobilize discontent. The mobilizing potential of new information technologies has also been checked. Police forces are bigger and better equipped than ever before. And technocrats in central banks have been given unprecedented power to avoid full-scale economic calamities.

Tracing the histories of economic unrest in the United States and Great Britain from the nineteenth century to the present, The End of Protest shows that governments have always been preoccupied with the task of controlling dissent over free market policies. But today’s methods pose a new threat to democratic values. For the moment, advocates of free-market capitalism have found ways of controlling discontent, but the continued effectiveness of these strategies is by no means certain.