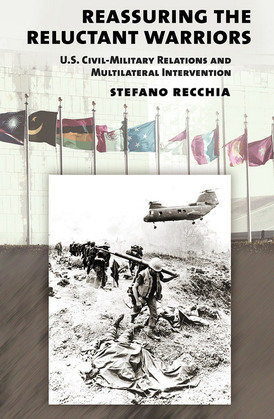 Why did American leaders work hard to secure multilateral approval from the United Nations or NATO for military interventions in Haiti, Bosnia, and Kosovo, while making only limited efforts to gain such approval for the 2003 Iraq War? In Reassuring the Reluctant Warriors, Stefano Recchia draws on declassified documents and about one hundred interviews with civilian and military leaders to illuminate little-known aspects of U.S. decision making in the run-up to those interventions. American leaders, he argues, seek UN or NATO approval to facilitate sustained military and financial burden sharing and ensure domestic support. However, the most assertive, hawkish, and influential civilian leaders in Washington tend to downplay the costs of intervention, and when confronted with hesitant international partners they often want to bypass multilateral bodies. In these circumstances, America's senior generals and admirals—as reluctant warriors who worry about Vietnam-style quagmires—can play an important restraining role, steering U.S. policy toward multilateralism.

Senior military officers are well placed to debunk the civilian interventionists' optimistic assumptions regarding the costs of war, thereby undermining broader governmental support for intervention. Recchia demonstrates that when the military expresses strong concerns about the stabilization burden, even hawkish civilian leaders can be expected to work hard to secure multilateral support through the UN or NATO—if only to reassure the reluctant warriors about long-term burden sharing. By contrast, when the military stays silent, as it did in the run-up to the 2003 Iraq War, the most hawkish civilians are empowered; consequently, the United States is more likely to bypass multilateral bodies and may end up shouldering a heavy stabilization burden largely by itself. Recchia's argument that the military has the ability to contribute not only to a more prudent but also to a more multilateralist U.S. intervention policy may be counterintuitive, but the evidence is compelling.