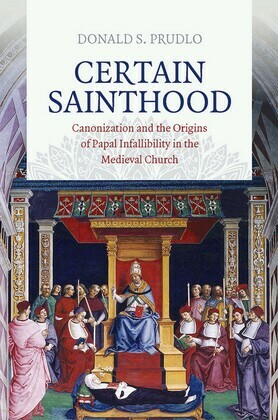 The doctrine of papal infallibility is a central tenet of Roman Catholicism, and yet it is frequently misunderstood by Catholics and non-Catholics alike. Much of the present-day theological discussion points to the definition of papal infallibility made at Vatican I in 1870, but the origins of the debate are much older than that. In Certain Sainthood, Donald S. Prudlo traces this history back to the Middle Ages, to a time when Rome was struggling to extend the limits of papal authority over Western Christendom. Indeed, as he shows, the very notion of papal infallibility grew out of debates over the pope's authority to canonize saints.

Prudlo's story begins in the twelfth and thirteenth centuries when Rome was increasingly focused on the fight against heresy. Toward this end the papacy enlisted the support of the young mendicant orders, specifically the Dominicans and Franciscans. As Prudlo shows, a key theme in the papacy's battle with heresy was control of canonization: heretical groups not only objected to the canonizing of specific saints, they challenged the concept of sainthood in general. In so doing they attacked the roots of papal authority. Eventually, with mendicant support, the very act of challenging a papally created saint was deemed heresy.

Certain Sainthood draws on the insights of a new generation of scholarship that integrates both lived religion and intellectual history into the study of theology and canon law. The result is a work that will fascinate scholars and students of church history as well as a wider public interested in the evolution of one of the world’s most important religious institutions.