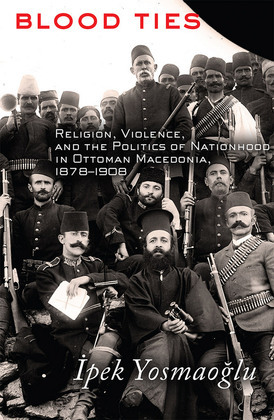 The region that is today the Republic of Macedonia was long the heart of the Ottoman Empire in Europe. It was home to a complex mix of peoples and faiths who had for hundreds of years lived together in relative peace. To be sure, these people were no strangers to coercive violence and various forms of depredations visited upon them by bandits and state agents. In the final decades of the nineteenth century and throughout the twentieth century, however, the region was periodically racked by bitter conflict that was qualitatively different from previous outbreaks of violence. In Blood Ties, Ipek K. Yosmaoglu explains the origins of this shift from sporadic to systemic and pervasive violence through a social history of the “Macedonian Question.”

Yosmaoglu’s account begins in the aftermath of the Congress of Berlin (1878), when a potent combination of zero-sum imperialism, nascent nationalism, and modernizing states set in motion the events that directly contributed to the outbreak of World War I and had consequences that reverberate to this day. Focusing on the experience of the inhabitants of Ottoman Macedonia during this period, she shows how communal solidarities broke down, time and space were rationalized, and the immutable form of the nation and national identity replaced polyglot, fluid associations that had formerly defined people’s sense of collective belonging. The region was remapped; populations were counted and relocated. An escalation in symbolic and physical violence followed, and it was through this process that nationalism became an ideology of mass mobilization among the common folk. Yosmaoglu argues that national differentiation was a consequence, and not the cause, of violent conflict in Ottoman Macedonia.