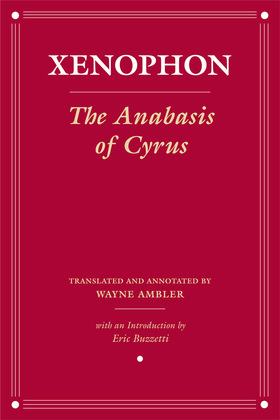 The anabasis of Cyrus

One of the foundational works of military history and political philosophy, and an inspiration for Alexander the Great, the Anabasis of Cyrus recounts the epic story of the Ten Thousand, a band of Greek mercenaries hired by Cyrus the Younger to overthrow his brother, Artaxerxes, king of Persia and the most powerful man on earth. It shows how Cyrus' army was assembled covertly and led from the coast of Asia Minor all the way to Babylon; how the Greeks held the field against a superior Persian force; how Cyrus was killed, leaving the Greeks stranded deep within enemy territory; and how many of them overcame countless dangers and found their way back to Greece.

Their remarkable success was due especially to the wily and decisive leadership of Xenophon himself, a student of Socrates who had joined the Ten Thousand and, after most of the Greek generals had been murdered, rallied the despondent Greeks, won a position of leadership, and guided them wisely through myriad obstacles.

In this new translation of the Anabasis, Wayne Ambler achieves a masterful combination of liveliness and a fidelity to the original uncommon in other versions. Accompanying Ambler's translation is a penetrating interpretive essay by Eric Buzzetti, one that shows Xenophon to be an author who wove a philosophic narrative into his dramatic tale. The translation and interpretive essay encourage renewed study of the Anabasis as a work of political philosophy. They also celebrate its high adventure and its hero's adroit decision-making under the most pressing circumstances.