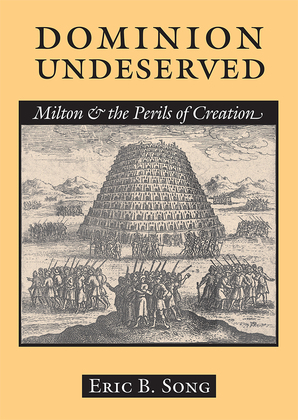 by Eric B. Song (Author)
Non-Fiction Literary essays
EPUB
unlimited loans, One at a time
Details

That the writings of John Milton continue to provoke study and analysis centuries after his lifetime speaks no doubt to his literary greatness but also to the many ways in which his art both engaged and transcended the political and theological tensions of his age. In Dominion Undeserved, Eric B. Song offers a brilliant reading of Milton's major writings, finding in them a fundamental impasse that explains their creative power.

According to Song, a divided view of creation governs Milton's related systems of cosmology, theology, art, and history. For Milton, any coherent entity-a nation, a poem, or even the new world-must be carved out of and guarded against an original unruliness. Despite being sanctioned by God, however, this agonistic mode of creation proves ineffective because it continues to manifest internal rifts that it can never fully overcome. This dilemma is especially pronounced in Milton's later writings, including Paradise Lost, where all forms of creativity must strive against the fact that chaos precedes order and that disruptive forces will continue to reemerge, seemingly without end.

Song explores the many ways in which Milton transforms an intractable problem into the grounds for incisive commentary and politically charged artistry. This argument brings into focus topics ranging from Milton's recurring allusions to the Eastern Tartars, the way Milton engages with country house poetry and colonialist discourses in Paradise Lost, and the lasting relevance of Anglo-Irish affairs for his late writings. Song concludes with a new reading of Paradise Regained and Samson Agonistes in which he shows how Milton's integration of conflicting elements forms the heart of his literary archive and confers urgency upon his message even as it reaches its future readers.