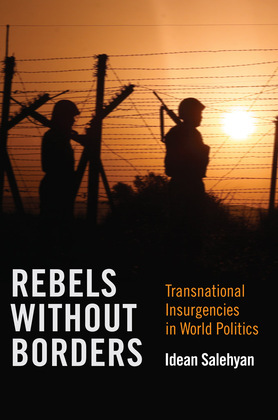 Rebellion, insurgency, civil war-conflict within a society is customarily treated as a matter of domestic politics and analysts generally focus their attention on local causes. Yet fighting between governments and opposition groups is rarely confined to the domestic arena. "Internal" wars often spill across national boundaries, rebel organizations frequently find sanctuaries in neighboring countries, and insurgencies give rise to disputes between states.

In Rebels without Borders, which will appeal to students of international and civil war and those developing policies to contain the regional diffusion of conflict, Idean Salehyan examines transnational rebel organizations in civil conflicts, utilizing cross-national datasets as well as in-depth case studies. He shows how external Contra bases in Honduras and Costa Rica facilitated the Nicaraguan civil war and how the Rwandan civil war spilled over into the Democratic Republic of the Congo, fostering a regional war. He also looks at other cross-border insurgencies, such as those of the Kurdish PKK and Taliban fighters in Pakistan. Salehyan reveals that external sanctuaries feature in the political history of more than half of the world's armed insurgencies since 1945, and are also important in fostering state-to-state conflicts.

Rebels who are unable to challenge the state on its own turf look for mobilization opportunities abroad. Neighboring states that are too weak to prevent rebel access, states that wish to foster instability in their rivals, and large refugee diasporas provide important opportunities for insurgent groups to establish external bases. Such sanctuaries complicate intelligence gathering, counterinsurgency operations, and efforts at peacemaking. States that host rebels intrude into negotiations between governments and opposition movements and can block progress toward peace when they pursue their own agendas.