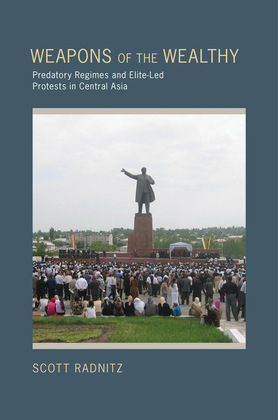 Weapons of the Wealthy

Mass mobilization is among the most dramatic and inspiring forces for political change. When ordinary citizens take to the streets in large numbers, they can undermine and even topple undemocratic governments, as the recent wave of peaceful uprisings in several postcommunist states has shown. However, investigation into how protests are organized can sometimes reveal that the origins and purpose of "people power" are not as they appear on the surface. In particular, protest can be used as an instrument of elite actors to advance their own interests rather than those of the masses.

Weapons of the Wealthy focuses on the region of post-Soviet Central Asia to investigate the causes of elite-led protest. In nondemocratic states, economic and political opportunities can give rise to elites who are independent of the regime, yet vulnerable to expropriation and harassment from above. In conditions of political uncertainty, elites have an incentive to cultivate support in local communities, which elites can then wield as a "weapon" against a predatory regime. Scott Radnitz builds on his in-depth fieldwork and analysis of the spatial distribution of protests to demonstrate how Kyrgyzstan's post-independence development laid the groundwork for elite-led mobilization, whereas Uzbekistan's did not.

Elites often have the wherewithal and the motivation to trigger protests, as is borne out by Radnitz's more than one hundred interviews with those who participated in, observed, or avoided protests. Even Kyrgyzstan's 2005 "Tulip Revolution," which brought about the first peaceful change of power in Central Asia since independence, should be understood as a strategic action of elites rather than as an expression of the popular will. This interpretation helps account for the undemocratic nature of the successor government and the 2010 uprising that toppled it. It also serves as a warning for scholars to look critically at bottom-up political change.