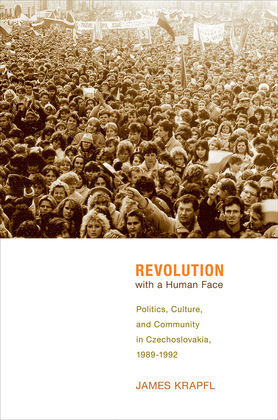 Revolution with a Human Face

In this social and cultural history of Czechoslovakia’s “gentle revolution,” James Krapfl shifts the focus away from elites to ordinary citizens who endeavored—from the outbreak of revolution in 1989 to the demise of the Czechoslovak federation in 1992—to establish a new, democratic political culture. Unique in its balanced coverage of developments in both Czech and Slovak lands, including the Hungarian minority of southern Slovakia, this book looks beyond Prague and Bratislava to collective action in small towns, provincial factories, and collective farms.

Through his broad and deep analysis of workers’ declarations, student bulletins, newspapers, film footage, and the proceedings of local administrative bodies, Krapfl contends that Czechoslovaks rejected Communism not because it was socialist, but because it was arbitrarily bureaucratic and inhumane. The restoration of a basic “humanness”—in politics and in daily relations among citizens—was the central goal of the revolution. In the strikes and demonstrations that began in the last weeks of 1989, Krapfl argues, citizens forged new symbols and a new symbolic system to reflect the humane, democratic, and nonviolent community they sought to create. Tracing the course of the revolution from early, idealistic euphoria through turns to radicalism and ultimately subversive reaction, Revolution with a Human Face finds in Czechoslovakia’s experiences lessons of both inspiration and caution for people in other countries striving to democratize their governments.